Animal Communication is a two way street. They have messages or lessons for us, but we may have messages for them too. I had a very special experience with a member of the animal kingdom that moved me share with you this story and message of Freedom!

My next door neighbor keeps his yard fenced for his dogs. One night I pulled my car into the driveway, in the dark pouring rain and I could see something inside his yard pacing the fence. I figured it was a fox (common to our area) and felt for him as he desperately tried to gain his freedom unsuccessfully stranded in the rain. 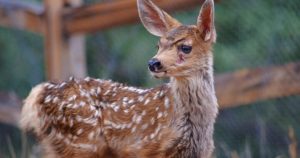 The next morning I realized it wasn’t a fox but a fawn. This vulnerable young spotted fawn was trapped behind the fences of humanity, tired, wet and clueless to finding his freedom…and mother. My heart went out to him as he continued to run along the crude fence just a wee bit high for him to jump.

Neighbors began to collect and I discovered a few of them had seen him leap in the day before, assuming if he found his way in he could probably find his way out. Now concern was setting in. The owner of the fenced yard hadn’t been home and we all knew this fawn would need his mother’s milk and care.

After consulting with animal rescue for advice we were advised to just open a gate and see if he could find his way out and then to his mother. In other words provide the way for nature to take its course. That was difficult for us, knowing the dangers of bears, foxes and cars this fragile fawn might meet without its mother’s protection…or ours. We heeded their advice and opened the gate. Neighbors went back to their homes and lives and I kept watch out my window, allowing the fawn to find his way.

An hour went by, even though the gate was open, the fawn had no clue it was his ticket to freedom…and survival. I had been inside the yard earlier taking pictures and decided to go in again. I hoped my presence might cause him to see the new possibility open to him… and snap a few more pictures.

Another ten minutes or so went by and still he tried to jump the fence in the same familiar places that continued to leave him trapped, bruised and mildly wounded. My heart sunk watching him, and my presence didn’t do a thing other than provoke a bit of curiosity about me as I was surprised how close he would get to me. 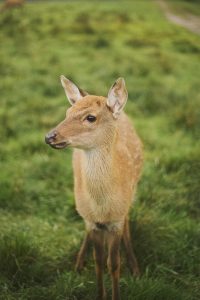 Then it hit me! Years ago my brother had a very uncooperative cat hiding underneath his bed for hours that he needed to get into a cat carrier. I got down on the floor and began to send a message using my imagination to the cat about needing to move him and why. I could tell he got my message and wasn’t happy about it, but he did cooperate quite nicely after that telepathic conversation.

Now it was time to use this technique with the fawn. I sat down in the middle of the yard, took a deep breath and got centered. I intuitively reached out to the fawn and began to send him a message of freedom. I sent him the images as I stared at the open gate. At one point I found myself using my finger pointing in its direction, like he would understand that. Lastly I sent out images of him being reunited with his mother.

Wouldn’t you know…two minutes later he headed slowly for the open gate. I quietly sat, holding my breath as he took another step closer to the opening. I dared not move a muscle for fear of distracting him. I closed my eyes and imagined him stepping cross the threshold. I lifted my gaze to find him doing just that.

He stepped out, a little unsure of himself and paused behind a tree peeking back at me, as if to say “thank you” and then he pranced off with five huge leaps and he was off to enjoy his freedom!

It was an extraordinary experience of connection, communication and awe with the animal world. I believe whenever an animal crosses your path in an out of the ordinary way they bear a message of wisdom and insight.

I kicked back and allowed myself to be open to the message this fawn has to bring me and all those that share in his story. I think his story and insight is one of finding Freedom. He spent hours trying the same way to get to his freedom by running and leaping forward only to be defeated. We gave him an option when we opened the gate, a pathway to freedom. He did not know it, see it or understand it, and so he kept trying to do the same thing over and over again with no success. I sent him guidance, a little divine intervention. When he had the vision he found his way easily to what he desired…his freedom!

How many times do we walk by the gate to our freedom? How often do we repeat patterns hoping for success, when we only need to be open to the possibility of an open gate that leads to the freedom of experiencing what we desire?

This fawn had crossed my path and communicated a message that I now share with you, a message of possibility and freedom. Experience the message I share with you from this fawns Animal Communication. I feel really good inside that my experience of animal communication supported that fawn in his successful quest for freedom.

Understanding the Schumann Resonance and its Effect on You!
October 9, 2018