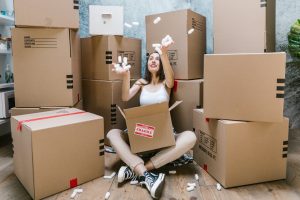 Moving day was the end of a long and disheartening series of chapters in my life. I was leaving behind good friends and my Mom & Step dad, but I was also leaving behind failed love relationships, a plodding along career, and the stagnation of routine. I was ready to take on a new beginning and breathe some new life into my journey. That was, once the movers showed up. I was well prepared for this move of physical stuff, emotional stuff and mental stuff. Every box had been labeled and numbered so I sat there on my boxes, anticipating what would be ahead for me in this new series of life chapters. I just needed the movers to show up, pack it up, and let me be on my way. They were supposed to arrive at noon.

I waited for the movers and continued to think about manifesting a new place with a view in Arizona. I had vowed if I was going to give up the luxury of Long Island waters I wanted mountains when I got to me new home.

I waited as the clock went by 1pm and told myself “its ok, movers have to move somebody else before me, its probably taking longer than expected, you know how moving goes”. When the clock hit 2pm I decided to call and see when they planned on arriving.

“WHAT??? What do you mean I’m not on the schedule!!!!! I called last week and confirmed!” Panic began to set in. The kind man I had been organizing this move with over the last 8 weeks knew this wasn’t good, and he was about to have an irate customer on his hands if he didn’t do something, and fast. He said he would call me right back. In those moments waiting for his return call I began chain smoking.

When he called back he had his “sweet as pie” voice on and said “no worries”, he was able to schedule me in first thing tomorrow morning. TOMORROW MORNING??? I had a plane to catch 6am tomorrow morning for Arizona. Tomorrow wasn’t going to cut it. He was quite disappointed his fancy footwork wasn’t going to do the trick and once again said he would call me back.

I began to freak…this just wasn’t happening. I remember a moment of sanity in between cigarettes. I took a deep breath and began a dialog with “The Ultimate Source”. I have been a good girl, followed all the signs and signals of my impending need to move. I did all the right things organizing, confirming, having everything I own packed and ready to go. I had consistently fought back fear by reminding my self of the new experiences that could be exciting and stimulating starting a new life. How did this happen? How could I have attracted in such a diabolical blunder?

I spent the next twenty minutes repeating the mantra “I know you can take care of this for me” like it was a chant playing inside my head. I had also unfortunately gone through at least half a pack of cigarettes by the time the next call came.

Alleluia, they were going to make it to me at 6pm. It meant that instead of spending my last night on Long Island at dinner with my favorite people, I would be closing up an apartment, but “thank you” Ultimate Source, I’ll take it! Who says this manifesting stuff doesn’t work? I just experienced a miracle, and finally the heart attack levels of stress I had been enduring began to subside.

As it turned out one of my closest girlfriends that I was going to be spending the evening with enjoying quality time, offered to come and help me close the apartment up. I was deeply moved (no pun intended) at how giving, generous, and supportive she was getting down and dirty with me as we finally locked the apartment doors and made the last dumpster run at 10:30 at night. It was one of those moments you realize how fortunate you are to have some one that loves and cares for you that much. I have never forgotten what a great friend she was that night, and it really allowed me to be reminded of the specialness of our friendship. So the miracle came with a bonus.