On Monday evenings it was my pleasure to show up to a little café situated on Main St-Bayshore, LI to do Psychic Readings for the patrons. “Milk & Sugar” is a rustic Victorian gourmet respite with real character. My favorite spot to do Readings was in front of the fireplace, and I showed up early so I could secure that spot before the other Psychics streamed in to claim their space. Every Reader likes to find a spot that makes them comfortable energetically to enhance their ability to tune in, and I am no different. I had been doing this gig for awhile, and knew from the moment we sat down we would all be busy reading till the place closed. It was always a long night of somewhere between 11-13 Readings for each of us, but it was also always a rewarding experience to share with the customers.

One Monday night I started to notice something very out of the ordinary. A particular group of tarot cards was showing up in a bunch of the Readings. Unfortunately it wasn’t the nicest combination and included the “Tower” tarot card. That card usually represents sudden catastrophe and upheaval…to make room for change. It just isn’t the most gracious way to go about welcoming change. My years of experience sounded a queer alarm and took serious notice and delicately handled the information as it seemed to pertain to each querent, but I knew to pay attention to this red flag.

To my surprise I found that 2-4 people for the next series of weeks had these cards show up with a few variations. I knew something major was up, and while although I continued to be very diplomatic in how I clued people in to the changes coming into their lives I saw the red flag now waving furiously to let me know this was something big that would effect a lot of people.

It had only been a month or so before that, after living 30 years and being raised on Long Island, I had come to terms with it being time for me to move on. I was single and had many close supportive family and friends, as well as a strong clientele on Long Island. Moving across the country to Arizona was a huge and scary growth move, but spirit had been whispering in my ear it was “time to move on”, and I have learned to follow that little voice and heed its call. I decided since my brother and Dad were in Arizona and I knew I was being called west, it would be a good place to start new, and begin what I now looking back see as the real beginning of my gypsy adventures.

I puzzled over the combinations of cards and asked “The Ultimate Source” (as I like to call God) for more detail on what this was. Was this why I was feeling the urge to move and not dawdle? Am I leaving behind friends and family that will in my absence face disaster?

I will admit, as a Psychic I found this quite frustrating because you can tune in some times and get so much clarity, and yet on this subject the premonitions were vague and lacking detail. I kept getting the feeling though it was big, going to affect many people, like an earthquake. I just kept getting the sense of rumbling, and buildings shaking, people in deep sadness, many many people.

I kept all this to myself, wondering all the while should I be questioning my sanity. Should I be sounding the alarm I can’t clearly define, and face all those that I love looking at me like I have gone over the metaphysical deep end, ranting about earth changes and apocalyptic events?

I knew that if what I sensed was on, I would have to accept that every one would be right where they were supposed to be as the divine nature of this event unfolded. I had to trust, trust it would be ok. Mean time I guess I was supposed to be “high tailing it out of Dodge”.

I remember just a few weeks before I left, one of my friends that is highly intuitive remarked that she had been sensing some strange things and was feeling very antsy inside, like something big was about to happen. She straight out asked me “are you moving towards a calling to the west, or are you moving away from danger”…. UGHHH! She had backed me into a corner, and I am one to tell the truth, especially when it comes to intuitive matters. I may do a good tap dance, and pad things a bit with a little sugar…but you always get from me the truth as I see it, when you ask. I spilled my guts about what I had observed for weeks in doing Readings at the café and my suspicions of its implications. 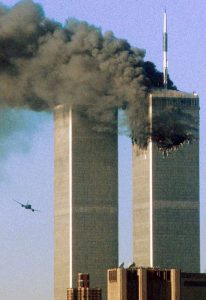 My father woke me up. He had a call from my brother who had been in the car driving to work listening to the news break on radio. Like every other American, we turned on our TV to see the news footage of flames of the first Tower, and the first feeds of home videos of the plane crashing into its side. It was just unbelievable and overwhelming to take in as we watched the first Tower crumble and fall. It was so incredibly surreal. After a couple of hours I had to rip my self from the TV to take a deep breathe outside, to really absorb what was happening. That’s when it hit me!

A very vivid memory came flooding back to me. I was sitting with a client at “Milk & Sugar”, looking down at the cards and knowing psychically she was going to be losing her husband in the disaster I had been foreseeing. I told her “family life was going to be going through some major changes, and there would be a lot of adjustments, a family member you are dependent on will need to be free. Treasure your family time and really make the most of enjoying each other”. Her next question to me was about her husband’s promotion. He was a firefighter in the city, and she was so proud of him, for he had just recently received special honors. I smiled on the outside, inside my heart sunk. I told her “he would be receiving a promotion of sorts, just not the one he expected, and he was indeed a man worthy of admiration which would be paid to him”.

Now it all made sense. “The Ultimate Source” had done the best job it could sending the messages. It was only my limited mind that could never have imagined. If you have ever taken a good look at the “Tower” card of the Tarot Deck it couldn’t have more plainly depicted the events of that day. Long Islanders were deeply affected and suffered great losses for many of their loved ones commuted daily into the city for work. It wasn’t an earthquake of land, but of building and heart. I will be for ever amazed at how persistent the warning was and how impactful the truth of its message.

Are you interested in your own personal Intuitive Reading with Leianne Wilson?